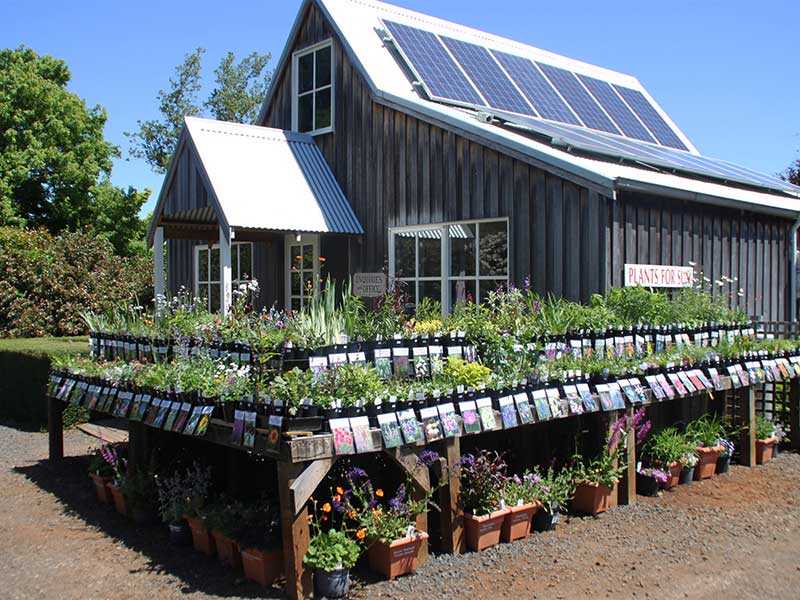 Secure delivery or
Pickup from our Nursery

Our Nursery is extensive, with a large range of unusual, dry hardy and shade loving perennials for all those difficult garden spots. You can place your order online and have them delivered to your door, or select to pickup your plants to save postage.

$12 for your first Plant,
then .70c for each additional plant.

Pick up or Delivery

Our Nursery is situated in Nayook, a 1.5 hour drive from metropolitan Melbourne.

We stock a huge amount of hardy, drought resistant and shade loving perennials.

You can order your plants online, and have them delivered to your door, or you can select to pick them up yourself, saving postage, and enjoying a beautiful day out at our Nursery.

Opening Times: First Tuesday and Wednesday of each month.

See our Visit page for detailed directions, or call us on:

The recent prolonged dry and baking heat (I think I never want to see a hose or a bushfire again!) have really sorted out the strong from the weak in our garden.Shining lights, beacons of hope at the moment, are our Pineapple Lilies. Suddenly those ordinary old workhorses, have turned into thoroughbred champion stayers.
Previously overlooked and chucked up the back because they are so ordinary, now I want more right at the front. How easily swayed and fickle a keen gardener can be.

Hardy, pest resistant and very easy to grow. And blooming now despite everything. What more can you ask?
They are staying with a show of colour in all the worst weather, and even providing scarce flowers for the vase inside. The flower colours on the new ones are lovely – blends of pinks, deep wine reds and creams.

The newer varieties we are offering at Melbourne International Flower and Garden Show are really quite glamourous with lovely foliage colour and interest. Wine red leaves, spotted dark leaves, glowing lime leaves – very on trend designer chic. But just as tough and hardy.
And bless them, flowering their pineapple heads off through all the recent dry.

The old common white ones with green leaves my grandmother grew on the farm – way up the back because they did not need much water – have been overtaken by these new stylish models. But they are all bulbs still just as hardy.
Pineapple Lilies are not Pineapples, nor are they Lilies. They are tough summer growing bulbs from South Africa, so well acclimatized for long periods of heat and dry. Though most don’t mind if they get some summer water as you try to save the rest of your garden with an odd squirt from the hose. They prefer to be dry in the winter, so as my grandmother well know – ideal to put under the eaves, way up the back where you forget any winter water.

The Pineapple bit comes from the appearance of the showy flower spires with the top knot atop, and the Lily bit – no idea – any suggestions gratefully received. They are actually in the same plant family as Asparagus, but not for eating. For the native peoples of South Africa – they were highly regarded for their anti-inflammatory properties in their traditional medicine.

The genus name – Eucomis – comes from “well-haired” or “lovely haired” because of that ever so attractive crown of bracts at the top of the long, showy flower spikes. Even when the flower spires go off to seed, they are still attractive. Foliage colours in the new spring leaf growth are fabulous. Put them at the front I say. Or they make excellent pot stayers, as they dont mind crowding.

Though Pineapple Lily is the most widely used common name, they are also known as King’s Flowers.
Its that crown topknot again, but perhaps also the resemblance to a Pineapple, and its association with the highest in the land.
Pineapples were first spotted for European delights by Christopher Columbus in 1493, on the Caribbean Island now known as Guadeloupe. It did not take his hungry crew long to discover how delicious they were.

Of course they were brought back to present to the high and mighty. A huge “pineapple stove” hot house was built at the Chelsea Physic Garden in 1723 so that they could grace the royal table. King Louis XV relished his first pineapple grown at Versailles in 1733. Catherine the Great ate great pineapples grown on her own estates by 1796. The amount of labour and heat (generated by fresh horse manure – it must have been a smelly place) required to produce pineapples in Europe, meant they were a delicacy of rare extravagance.

But our Pineapple Lilies are no such faint-hearted delicacies. Put them at the front, and watch them defy the toughest summer can throw at them.

Open to the Public

BY APPOINTMENT ON
ANY WEEKDAY 9am - 4pm.